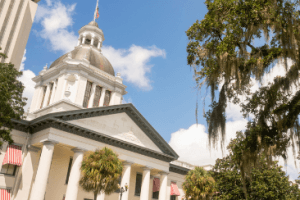 In the 2021 legislative session, the Right to Farm Bill, Florida Farm Bureau’s top priority, passed by overwhelming margins in both the House and the Senate, emphasizing the strong bipartisan support of SB 88, Farming Operations.

Florida Farm Bureau is recognizing the House and Senate sponsors of the Right to Farm Bill as its 2021 Legislators of the Year. Fourteen other members of the legislature will also be recognized as Champions for Agriculture because of their efforts to support specific aspects of the organization’s legislative agenda.

Legislators of the Year

Sen. Jason Brodeur and Rep. Jayer Williamson provided profound leadership by sponsoring the Right to Farm Bill that modernizes Florida’s Right to Farm Act, protecting farmers and ranchers from nuisance lawsuits. SB 88 is now the strongest Right to Farm legislation in the country.

“This bill is extremely important for Florida farmers and ranchers who are facing a multitude of challenges each day,” said John L. Hoblick, President of Florida Farm Bureau Federation.

“The fact that this potentially controversial bill passed by such wide margins gives credit to the leadership, commitment and hard work of both Sen. Brodeur and Rep. Williamson. I’m honored to recognize them for their support of Florida Farm Bureau’s priority bill this year.”

Florida Farm Bureau is recognizing 14 additional lawmakers as its 2021 Champions for Agriculture. These policy leaders advocated on issues vital to Florida agriculture.

“There are a lot of moving pieces in the legislative process and in order to be successful as an organization, we rely on legislative champions who sponsor the bills, file the amendments, chair the committees and take the tangible actions that result in a bill being passed,” said Adam Basford, Florida Farm Bureau’s legislative affairs director.

“There are so many legislators that have shown support for Farm Bureau’s priorities, but this is our attempt to thank a few who took specific action this year to get bills across the finish line.”

The following 2021 Champions for Agriculture provided leadership on key agricultural issues that significantly impact farming and the Florida economy: