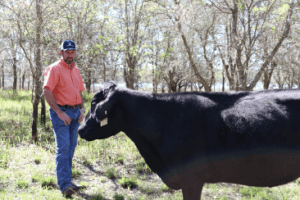 Hardee County Farm Bureau President Steve Johnson is a fourth generation farmer from Wauchula. He and his wife, Andrea, a fifth generation farmer, live in the same house that Steve grew up in. They have three children, B.J., Emma Jane and Laney.

This December will mark two years that Johnson has served as president of Hardee County Farm Bureau, though his involvement in Farm Bureau goes back to 2002. “Andy Neuhofer is the District Field Representative for our area and he was the one that encouraged me to join,” said Johnson.

“Over the years I have served on the county board of directors, as secretary and as vice president,” he added.

In addition, Johnson has dedicated 14 years to serving on the Florida Farm Bureau State Board of Directors where he currently sits as vice president.

Johnson explained that it’s the people in Farm Bureau that you come to know that make it special. “It’s nice to get to know like-minded folks, people you can depend on for life,” he said.

Each year, in November, Hardee County Farm Bureau holds the annual Ag Fest. The event has been held at the Hardee County Cattleman’s Arena in Wauchula. It is an opportunity for elementary school students to learn about agriculture first-hand from local farmers, ranchers and other agricultural producers and wildlife specialists.

“We have been doing this event for over 20 years,” Johnson mentioned. “We bring in roughly 400 4th graders, feed them and teach them over about a 6-7 hour period about local agriculture through 20 different stations from milking cows, citrus,  hay production, row crop production and even the phosphate miners come in to present.”

“Agricultural technology is constantly changing,” he added. “It’s important to have youth understand the changes and adapt to them. It’s possible to grow more on less land and we need to get them excited about agriculture. What they are doing today can make a difference for years to come.”