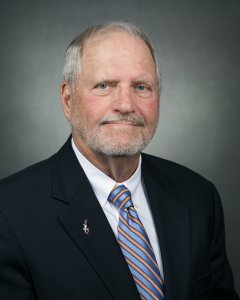 Passing the John Hoblick test helped get me the best job I’ve ever had. It’s the one I have now, at least for a few more weeks.

John vetted me through his Farm Bureau contacts in Iowa and Utah, where I’d previously served as an administrator. John’s OK alone didn’t make me the University of Florida’s senior vice president for agriculture and natural resources,  but it’s hard to imagine I would have been hired if the leader of a 140,000-member stakeholder organization had objected.

For the past 10 years, I’ve been privileged to be the university’s chief steward of the bond between UF’s Institute of Food and Agricultural Sciences and the Florida Farm Bureau Federation. That involved meeting regularly with John to strengthen our professional association, and before long, a friendship.

We talked frequently over dinner at restaurants in the neighborhood where we both live. We didn’t solve the world’s problems, but I like to think we solved some of Florida agriculture’s.

I have enjoyed many great moments in the UF/IFAS-Florida Farm Bureau Federation partnership. Among them was having UF/IFAS honored by Suwannee CARES for its work in support of sustainable agriculture in a region of the state that accounts for nearly one in five Florida farms.

I was also proud to see Gene McAvoy, Libbie Johnson, and Bob Hochmuth each honored in recent years with the Farm Bureau’s Extension Professional of the Year award. FFBF’s Taste of Florida Agriculture reception in the Capitol courtyard wasn’t just fun (and tasty); it was a way to celebrate an entire community of partners dedicated to the success of Florida food producers.

Kenneth Parker emerged as a leader to whom I turned to  for counsel, support for our growing research center in Hillsborough County and a reminder that gentility and grace can still carry the day in an era of sharp elbows and sharper insults. Jorge Abreu’s good humor and supportive messages kept me company on social media.

Andrew Walmsley was a Florida Farm Bureau policy guy not too far removed from being an Alpha Gamma Rho kid fixing fences at our beef teaching unit when I came to Florida. In recent years, he’s been an invaluable ally in D.C. as the American Farm Bureau Federation’s lobbyist.

Kevin Morgan not only provided UF/IFAS with leadership and support for 4-H, but a daughter who has given so much to UF/IFAS already. I enjoyed watching her mature from a CALS ambassador to president of the Collegiate Farm Bureau to now a professional communicator in our Animal Sciences Department.

I’ll never forget visiting Mack Glass in the wake of Hurricane Michael. Mack exemplified the resiliency of the Florida farmer as he showed me the devastation of a generation’s worth of timber and then brushed it off with a joke about how he and his wife were young enough to start over.

Farm Bureau members have been champions and constructive critics of UF/IFAS at the same time. They have consistently reminded me both of all we’ve done for agriculture and how many things we can improve upon.

John helped reinforce my understanding of the science customer’s point of view. And don’t worry, he took that point of view to the successful search for my successor. Thanks for 10 great years, and keep Florida growing.

Jack Payne is the University of Florida’s senior vice president for agriculture and natural resources and leader of the Institute of Food and Agricultural Sciences.