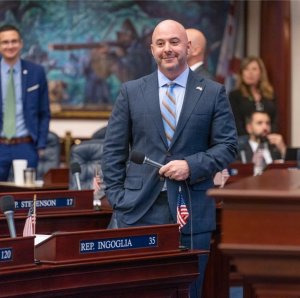 Florida Farm Bureau has named two state legislators for their commitment to agriculture during the 2020 legislative session. Rep. Blaise Ingoglia and Sen. Debbie Mayfield played leading roles in their support for agricultural issues. Chairman Blaise Ingoglia has been a legislative leader for Florida Farm Bureau and Florida agriculture during his time in the Florida House.

He sponsored HB 1199 – Environmental Protection Act. This bill contained the Rights of Nature preemption language, which ultimately passed as a part of SB 712, sponsored by Sen. Debbie Mayfield. Rep. Ingoglia was the driving factor in making sure this priority issue passed the House.

Rep. Ingoglia also Co-Sponsored and managed HB 1343 – Environmental Resource Management. This bill became the primary priority for Florida Farm Bureau, which contained the critical BMP language that Farm Bureau was advocating for and was the main companion bill to SB 712.

Florida Farm Bureau is grateful to Representative Blaise Ingoglia for his leadership and dedication to agriculture during the 2020 legislative session.

As chair, she played the primary role in the Senate’s funding programs at FDACs such as the Fresh From Florida program and the Rural and Family Land’s program.

Although there were many attempts by the Everglades Foundation and others to undermine SB 712, Sen. Mayfield stood firm in favor of our positions, and Florida Farm Bureau is grateful for that.