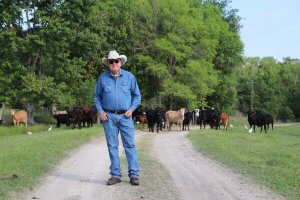 Jim Farley is a multi-generational cattle rancher from Clay County. He learned at a young age how to transform an essential job into a thriving and fulfilling career. Shortly after receiving his degree in Ranch Management from Texas Christian University and marrying the love of his life in 1969, Farley Cattle Company was born. During their 53 years of marriage, Jim and Jean have worked together to build a successful cattle, hay and timber business that spans more than 7,000 acres in North Florida.

Agriculture is part of Farley’s family heritage. Growing up in a ranching family, he has witnessed a change of times since he was a young boy. A volatile market and fencing laws enforced throughout the 1960’s made it difficult for family ranches to remain in business. Fortunately, Farley’s aspiration to start a ranching business was not deterred and he was able to begin his venture after college.

Farley’s favorite part about being a cattle rancher is the ability to work alongside his family.  His sons, Jody and Josh, joined the family business once they were old enough to rope and ride horses.

Each family member plays a critical role in day-to-day ranch operations. Jean serves as the ranch’s bookkeeper and office manager. Jody sells veterinary supplies and owns a business that processes and ships cattle. Prior to working full-time for the family ranch, he led a successful career for the Division of Florida Forestry for 16 years. The youngest son, Josh, manages the ranch full-time. In addition, he runs a cattle brokerage business and grows seed and hay. Farley is an advocate for loving what you do.  His career has been dedicated to growing a successful business with hopes that his sons desire to take it over.  His only request for his sons is to be happy with the path they choose. Farley firmly believes happiness is key to a long-term career and one that you won’t want to retire from.

These days, he enjoys saddling up to work alongside not only his sons, but also his grandchildren.  The bond they share is so special and Farley desires to teach them about cattle, life and even Farm Bureau. Farley has been an active member of Florida Farm Bureau throughout his career.  He has served on the Clay County Farm Bureau Board of Directors as well as the Florida Cattleman’s Association and the Clay County Cattleman’s Association Board of Directors.  From advocating with local members to helping to volunteer at the county fair, he cares deeply about the organizations that have given so much to his family.

Florida Farm Bureau has been Farley’s lifeline, especially when times have been hard. He is grateful for the leadership given from Farm Bureau leaders at the local, state and federal levels.  He and his sons have spent time advocating for Farm Bureau policy and issues impacting their livelihood.  Farley also recognizes the strength in grassroots efforts to protect the rural way of life.

Farley has spent his career dedicated to caring for the land.  He believes in taking care of local natural resources since they offer so much to his cattle, hay and timber business.  Farley is intentional about his impact on the environment and was recognized in 2017 for his efforts by Florida Farm Bureau’s County Alliance for Responsible Environmental Stewardship (CARES) program.  Farley believes if you take care of the land and its resources, it will take care of you.

The COVID-19 pandemic taught him that without family, your business can go awry quickly.  As a seasoned cattle rancher, Farley has learned many lessons throughout the years and offers advice to those around him.

To Farley, resilience means being able to exist in agriculture and handling the highs and lows, the valleys with the mountains.  He believes if you love something enough, you should always be tough enough to overcome adversity. Although not every day on the ranch is easy and the market is unpredictable, remain rooted in appreciation when good times are plentiful.  Farley most important thought to remember is that it’s all about loving what you do and who you do it for. For him, it’s all about family.