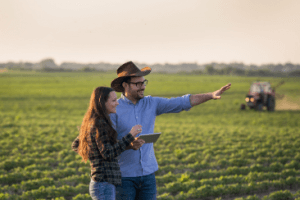 A panel of farmers and ranchers discussed different ways they are improving their operations during a session of the American Farm Bureau Virtual Convention last month.

Farming operations look differently today than they did 10 years ago. Farmers and ranchers are re-inventing the wheel when it comes to diversifying their operations to generate new revenue streams.

Growers have turned to social media, direct marketing and specialty crop production to enhance their operations and generate more income.

Jenny Holterman is an almond grower from California. She is a 4th generation grower currently raising the fifth generation. As a way to get accurate information out to consumers, and tired of misinformation, Holterman started a blog, “Almond Girl Jenny.” “I wanted to connect a face to a family farm,” she said.

“I began direct marketing under the “Almond Girl” label. Holterman was able to develop a customer base and clientele and a general interest in her product and her family’s life on their California almond farm.

Matt Cunningham and his father are corn and soybean farmers in central Ohio. Due to a lack of development on his family’s farm, low commodity prices and larger farms moving in, he decided to look for something more profitable. In 2014, Cunningham began a new venture specializing in brewing ingredients for Ohio’s craft brewers.

“The decision came from the agricultural side as a way to diversify our farm,” he said. “Subconsciously though I think it was a way to connect something popular that I enjoyed back to the farm.” Cunningham and his family grow quality hops, stone ground flour and produce small batch craft malt on their farm, Rustic Brew Farm.

James O’Brien is a seventh generation rancher from south Texas where he raises horses and cattle on J.J. O’Brien Ranch. O’Brien began selling grass fed beef direct to consumers two years ago and says that he has a come a long way in a short period of time. “We are currently in our second year of selling products,” he said.

“What started as a necessity has grown so much.” O’Brien originally sold only quarters, halves and wholes when he began his direct sales but today he offers custom beef boxes so that the customer has more control over which cuts they receive.