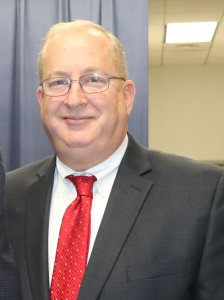 Duval County Farm Bureau (DCFB) President Greg Tison is a North Florida native. He was born in Jacksonville, and later moved to Clay County with his family when he was 12 years old.

“My family raised cattle, livestock and had a family garden,” he said. Tison later relocated back to Jacksonville upon graduating from high school. He has been married to his wife, Joy, for 32 years.

Tison is the general manager at the Jacksonville Farmers Market, a Duval County landmark that has been in operation in the same location since 1938. “We’re the oldest and largest working farmers market in Florida,” Tison said.

The market offers everything from fresh produce and seafood to honey and gourmet dressings and jams and is open seven days a week. “There is a lot of competition in Ducal County with grocery store chains but the market remains a trusted and unique way for members of our community to purchase food.

Tison has served as DCFB president for 4 years. His involvement in his community expands to serving on other local organizations such as Duval County Agriculture Council Committee and a previous member of the Duval County Cattleman’s Board.

“It’s an exciting time for DCFB, we have an active Women’s Program that I am very proud of and the county is building a YF&R Program that has really taken off,” he said.

DCFB is known for hosting their annual Food Check-Out Week event each February. A mystery shopper event is held at a local grocery store where three lucky shoppers are chosen at random to have their entire grocery cart items paid for, by the Duval County Farm Bureau.

This year’s event took place on February 18 and the Women’s Committee donated $1,500 to the Ronald McDonald House as well as donated more than $6,000 worth of food.

“The luncheon is intended to bring urban and rural residents together to display the contributions of the agricultural community in our county,” he said. Due to the pandemic, last year’s luncheon was canceled, however, plans to host an event this year are underway.  “It’s important that we share the impact agriculture has on our urban community.”

Tison is proud to be part of an organization like Farm Bureau that strives to instill core values and advocates for those who make a living producing our food and fiber. “We need to continue to instill these values into the next generation,” he said. “With everything going on in our world right now, it’s now more important than ever to ensure that we never take for granted our abundant food supply.”