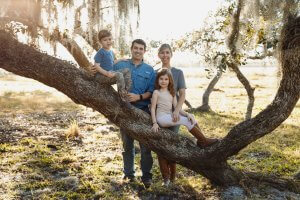 Martin County Farm Bureau (MCFB) President Reed Hartman has had a connection to American agriculture as long as he can remember. “When I was little I remember my dad taking me to different agricultural events and my first job was picking beans and baling hay on a farm in central Illinois,” he said. Hartman comes from a long line of Floridians who have lived in present-day Martin County for over 100 years.

A career change by his parents prompted them to move from Florida to Indiana, which is where Hartman was born. The family later moved to Bloomington, Illinois, where Hartman spent most of childhood before returning to his Florida roots in 2002.

Today, Hartman and his wife Elizabeth live in Stuart with their two children, Lilly-Kate, 7 and Hunter, 5. In a partnership with his father, Rick, Hartman owns C-23 Cattle Company where he runs a 200+ head of cattle for a cow-calf operation. Hartman also runs his own auction business and holds a contractor’s license.

“The relationships I formed and connections I made with other young agriculturalists across our state was such a valuable experience,” he said. “My time on the Florida Farm Bureau State Board of Directors provided an unforgettable educational experience and served as a great opportunity to hear other perspectives on issues affecting agriculture in Florida.”

His dedication to agriculture in his community led Hartman to being elected as MCFB president in April of 2019 during the county Farm Bureau’s annual meeting. Every year during the fall, MCFB holds their annual Farm-City Week Luncheon.

Hartman explained that MCFB partners with One Martin, a group of large land owners and agricultural producers in Martin County to host the luncheon where local beef, swamp cabbage and vegetables are served.

“The event is a huge success, last year we had 180 people in attendance including local business owners and Commissioner of Agriculture Nikki Fried as our guest speaker,” Hartman stated.

Hartman shared with us that his favorite meal his a ribeye steak, home fries and fried okra.