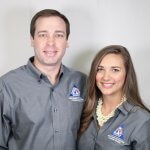 The Armstrongs currently reside in Lake Placid in Highlands County. Both Ryan and Sydney come from agricultural backgrounds where their families have instilled in them a love for the land and have shaped them into the people they are today.

Sydney grew up in Jackson County and her love for agriculture comes from her papa with whom she spent summers picking and shelling peas and butter beans with. Heavily involved in Future Farmers of America (FFA), Sydney served as the Florida FFA State Officer from 2011-2012.

Ryan grew up on his great-grandfather’s farm in Brooksville in Hernando County. “Having grown up on a farm that has been in my family for seven generations, I cherish the values and lessons learned from the hard work it takes to work in agriculture,” he said.

Sydney began her involvement in Farm Bureau at the collegiate level where she served as the Collegiate Farm Bureau Secretary for two years. “My favorite thing about Farm Bureau is that it encompasses all types of agriculture and you meet so many amazing people, with the same values as your own,” she said.

The Armstrongs moved to Highlands County where they have resided for a year and a half. Both being new to the area, they attended their first Highlands County Farm Bureau (HCFB) Young Farmers and Ranchers meeting together.

“We knew we wanted to be involved in what Farm Bureau stands for and what it does for the community,” Sydney mentioned.

“My favorite thing is that it opens doors for young farmers and ranchers to be involved in state and federal policy,” Ryan stated. “I have enjoyed attending Tallahassee Days and Field to the Hill and have learned so much about advocacy.”

One of the largest events in Highlands County is the Annual Cracker Shoot held each April. “Where I’m from, clay shooting as a sport is not very prominent so this was new to me,” Sydney said. “I love that we have great support from our county board and they appreciate our involvement and help for events like this.”

Every fall, HCFB holds its annual meeting and the Young Farmers and Ranchers Committee volunteers to serve food and beverages. “My favorite part of it is that it highlights those in our community who are doing great things for agriculture,” Ryan said.

The couple is excited for what the future brings and can’t wait to see all of the young farmers and ranchers from across the state at the annual Young Farmers and Ranchers Leadership Conference next week in Daytona Beach.