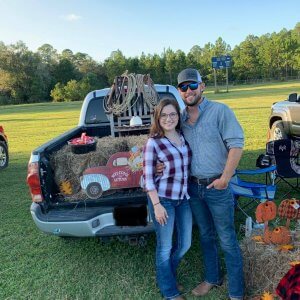 Upon graduating high school, Smith attended Abraham Baldwin Agriculture College where he graduated with a degree in general diversified agriculture in December 2017. “I graduated on a Thursday and by the following Monday, I was working as assistant farm manager at Greens Farms in Bunnel growing cabbage,” he said.

“When I first started I was running the harvest side of the operation,” he said. “I began to branch out and learn every aspect of the farm so I can plug in wherever I am needed.” Smith explained that his job at Greens Farms is very diverse.

“Some days I’m on the tractor watching the soil turn, sometimes I help with spraying,” he said. “I’m a plumber, a mechanic and an errand boy. Some days I will stand out there in the field making the decisions on harvest and then some days I just haul cabbage. I enjoy what I do because there is never a year that is exactly the same.”

Smith decided to follow in his family’s footsteps when he joined the Young Farmers and Ranchers Program when he was 19 years old. Smith was elected last month as Flagler County Farm Bureau President during the county’s annual meeting. He is the youngest president to serve.

Prior to becoming president, he served on the Flagler County Farm Bureau Board of Directors. Smith met his fiancé, Kamryn, a Clay County Young Farmer and Rancher, at the FFB YF&R Conference in Daytona Beach in July of 2019. The two plan to be married next June.

Kamyrn has a strong FFA background and has a goal to be an Ag teacher. Both Kamyrn and Jared’s fathers are pastors and the two share the same lifelong beliefs and interests.

Smith grew up in 4-H where he learned leadership skills that “paved my way to where I am today,” he said. He enjoys working with young people and is passionate about encouraging youth to be involved in agriculture.

“I am particularly proud of the food donation we made to help local farmers get back on their feet during the pandemic,” he said. “My hope is that our relationships with community organizations will only strengthen in the future.”

Smith wants to contribute to “cultivating tomorrow” by spreading the word of the FFB Young Farmers and Ranchers Program. “We are preparing our youth through programs like 4-H and FFA but we are also planting our feet.” He said.

“Sometimes there is an awkward period of time in between graduating from programs like 4-H and FFA and finding our place in the real world and the Young Farmers and Ranchers Program is the perfect place to plant your feet.” Smith plans to encourage participation in Flagler County Farm Bureau and the Young Farmers and Ranchers Program by emphasizing the impact one’s membership has in the grassroots organization.

“To be part of an organization like Farm Bureau where we have a true voice in the Ag industry is rewarding,” he said. “It is nice to have folks in Florid Farm Bureau who you know will advocate on behalf of Florida agriculture.