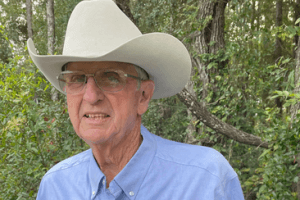 John Thomas was born and raised in the small community of Oak Grove in Southwestern Citrus County. “The town had a school house, a church and a post office”, recalls Thomas. With its dirt roads and overhanging oaks, Oak Grove is reminiscent of “Old Florida,” much different from how most would view Florida today.

Thomas’ family has deep roots in Citrus County agriculture, in the cattle industry in particular, and his grandfather was part of the 1850 census. Like most rural children in the 1940s, Thomas was born at home and is one of four siblings. Today, he and his wife, Ella, also a Citrus County native, own the property in which he spent his childhood years.

The Thomas’ both were raised in the cattle industry and are still very much involved today. John and Ella have two daughters, Sarah and Martha, both of whom are University of Florida graduates and have families and cow-calf operations of their own.

“We raised our girls to be hard workers, we taught them the importance of going to church, going to work and how to provide for themselves,” Thomas said. “Ever since they were babies, they were with us in the pastures and learning about agriculture – cattle, hay and watermelon production.”

Thomas stressed that because of the support from organizations like Farm Bureau, he was able to raise his children, and now grandchildren, in agriculture. “Farm Bureau stands for all of us and helps us accomplish what we have to do every day to make a living,” he stated.

Service to Hernando-Citrus County Farm Bureau (HCCFB) runs in the family as Thomas is the second generation to serve as president, currently in his twelfth year. He succeeds his father and father-in-law in presidency with a tenure of 44 years on the board of directors behind him as well.

“I can’t remember a time when I wasn’t involved in Farm Bureau,” he said cheerfully. Upon obtaining his driver’s license when he was seventeen, Thomas purchased Florida Farm Bureau Insurance and has been a member ever since. He celebrated his seventy-fifth birthday last June.

Held every year in the fall, the HCCFB Annual Meeting is an event that draws a crowd of 250-300 people to the Hernando County Fairgrounds. The event is a time where members of the community can fellowship and speak with legislative officials and other special guests over a catered meal.

A bake sale and pie raffle is held to raise money for the HCCFB Women’s Committee in conjunction with the annual meeting.

Last Christmas, local young farmers and ranchers held a turkey cooler donation drawing where, through the generosity of the community, they were able to raise enough money to purchase 100 turkeys to donate to families in need.

“I am so proud of what our young people are doing to make an impact in our community,” Thomas said. “Because of them, Farm Bureau will be strong for years to come.”